Legislature About To Destroy Religious Freedom Protection in Indiana!

Religious Freedom is in danger in Indiana! 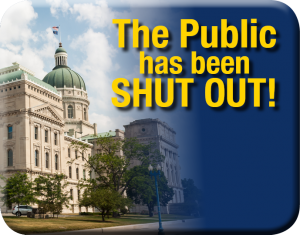 On Thursday, April 2nd, the Indiana Senate and Indiana House of Representatives will be voting to destroy the Religious Freedom Restoration Act passed earlier by the General Assembly!

Senate Bill 50 is the legislation the Senate and House will be voting on that has been written in secret and behind closed doors!  The citizens of Indiana have not had the chance to see and or comment on it!  There has not been one public hearing!

Please call and email your State Senator and State Representative by noon on Thursday, April 2nd with the following message:  “Please vote against Senate Bill 50 which would take away religious freedom for Hoosier businesses they have now.”

(Click Here) to find out who your legislators are!